New York-based jockey Irad Ortiz traveled to Puerto Rico this weekend to contest the international series of races held at his home country of Puerto Rico’s Camarero Racetrack. Headlined by the Caribbean Derby (Clasico Internacional del Caribe) on Sunday, Ortiz also rode in undercard international stakes on Saturday, including the G1 Confraternity Cup for 3-year-olds and up over 10 furlongs.

Aboard Puerto Rican Triple Crown champion Arquitecto in the Confraternity Cup, Ortiz won his first race in the Caribbean International series on Saturday, reports elnuevodia.com. The 7-year-old son of Hockenheim had finished second in the “Clasico del Caribe,” the international race for 3-year-olds, in 2012, then went on to run third in both the 2013 and 2014 editions of the Confraternity Cup. Arquitecto had missed the 2015 edition, but returned one more time to complete a strong 2016 season in which he was never worse than second.

Ortiz gave the José Dan Vélez-trained Arquitecto a flawless ride in Saturday’s $100,000 main event, waiting patiently while nearly eight lengths off the early leaders. Nearing the 600-meter mark, Ortiz started to rouse the older gelding and the pair began to pick off their competitors. Entering the far turn there were just two lengths to make up, and Arquitecto passed the leading pair easily while three-wide. At the head of the lane Ortiz had a two-length advantage, and it required some serious riding to keep a tiring Arquitecto on course for the 2 1/2-length victory.

“This victory means a lot to me because I got it representing my country,” said Ortiz (comments translated from Spanish). “This is the dream of every jockey. It has always been my dream to win a Caribbean race, and finally I did it.”

Arquitecto now has a record of 25 wins from 41 official starts, and the gelding gave Puerto Rico its fifth winner in the Confraternity Cup. He is owned by the Rafanil Stable, which includes his breeder, Rafael Matos, and Dr. David Suarez-Fuentes, among others. The same connections were the owners of Arquitecto’s dam, Coordinadora, who won the 2004 Caribbean Ladies’ Classic. 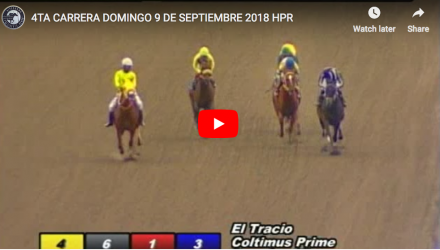